Some dog breeds can be very territorial in their instincts and behaviors. If you’re seeking information on how territorial the Samoyed breed can be, then this article is the right place to start. Understanding territorial behavior in Samoyed dogs could be useful whether you already own a Samoyed, are thinking of adopting a Samoyed, or are simply interested in the nature of this active and visually appealing breed.

Are Samoyeds territorial? In some ways, but rarely aggressively. Samoyeds are highly conscious of their human family and home territory, making them very good watchdogs. They may bark and jump around when someone new enters their territory in order to alert the rest of the household. At the same time, this is unlikely to translate into violent or threatening behaviors. Samoyeds are not generally good guard dogs.

Samoyeds are known for being smart, loyal, and independent thinkers. They are also stubborn and playful dogs who need plenty of exercises to burn off energy and stimulate their minds. Read on to find out more about the Samoyed’s sense of territory and how this fits into their wider nature.

Table Of Contents show
Are Samoyeds Territorial?
Are Samoyeds aggressive?
Need for exercise and play
Why are Samoyeds bad guard dogs?
Will a Samoyed protect its owner?
A final word…

In general, territorial behavior is common in canines. Many dog breeds are extremely defensive of the family home and aggressively guard any area or object they regard as belonging to them including food, eating dishes, and toys. Territorial reactions can include growling, snarling, aggressive barking or physical attacks such as lunging and biting.

READ ALSO:  How To Stop A Samoyed From Biting? 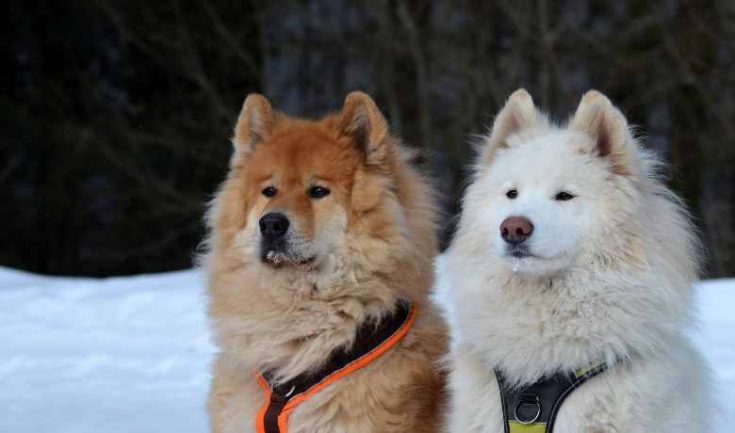 Among dog breeds, Samoyeds are at the lower end of the scale for territorial behavior, particularly the aggressive defense of territory. While very conscious of their territory and their ‘pack’, the innate amiability and gentleness of Samoyeds influence how territorial feelings might be expressed.

It’s worth noting that Samoyeds are very smart dogs. According to canine psychology expert Professor Stanley Coren’s system, Samoyeds have higher than average intelligence among dog breeds. With this high intelligence, Samoyeds have no problem in mentally defining and understanding the extent of their territory or distinguishing friends from strangers.

However, their instincts don’t tend to lead Samoyeds to violent behavior in defense of their home and pack. When a stranger approaches or enters their territory, they may bark loudly and persistently to alert their human family but they will not usually chase or physically attack intruders.

READ ALSO:  How Often Do Samoyeds Need To Be Groomed?

While Samoyeds can be loud dogs and you should expect plenty of excited barking and some howling from your Samoyed, they are not normally aggressive dogs. Considering the background of the Samoyed breed can help us to better understand their temperament.

Samoyeds are a truly ancient working breed, named after the Samoyede people they originally lived within northwestern Siberia. Samoyeds were bred for hauling sleds, herding, and protective reindeer, and helping their humans to hunt animals. Living and working so closely alongside human families, Samoyeds developed a strong interdependent relationship with human beings as well as a non-aggressive, sociable, and independent temperament. 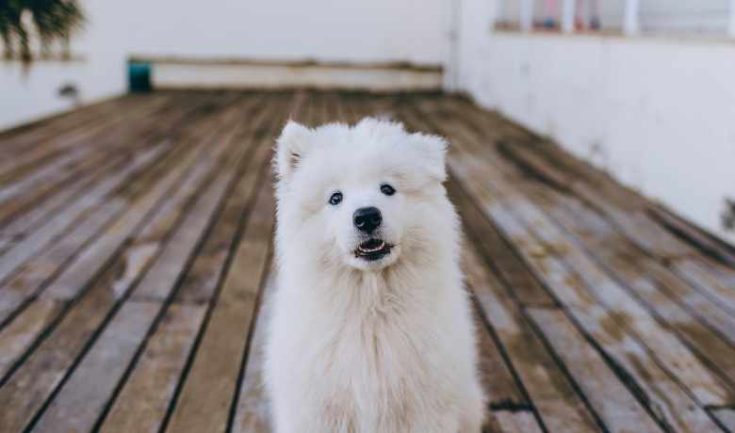 A strong protective instinct was bred into Samoyeds by early Siberian families living off reindeer herds in a harsh, frozen environment. Samoyeds would be expected to round up the reindeer and bark to warn off threats or raise the alarm if a reindeer or human needed assistance. They were not bred as an attack or fighting dogs but rather shared every aspect of family life, even sleeping alongside humans at night.

This protective nature and lack of aggression make Samoyeds excellent pets for families with small children, elderly, or otherwise vulnerable members. They will do their best to summon help when there is an obvious problem but are unlikely to turn on human beings or other dogs.

Remember that any dog has the potential for aggression if they are not well raised, socialized, and trained. As with any other breed, Samoyeds who are traumatized, in pain, or feel otherwise overwhelmed could bite or act out aggression in some other way. Here are some of the explanations you might want to consider if you see aggression in your Samoyed:

Need for exercise and play

There is a potential for people unfamiliar with Samoyeds to mistake their playful, high-energy jumping and running about for aggression. In reality, a Samoyed is more likely to be trying to draw other dogs or humans into a vigorous game than a fight. 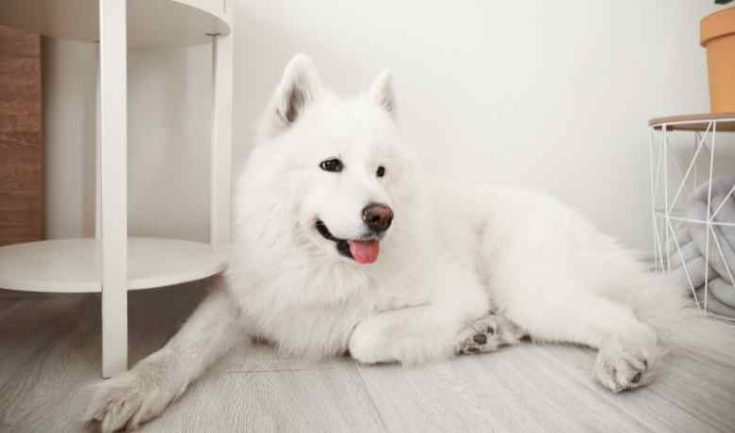 How Long Do Samoyeds Live? Keep Your Samoyed Healthy.

As working dogs, Samoyeds do need several hours of exercise each day to work off some of this energy. Long walks, jogging with family, or playing vigorous games of fetch or obstacle courses etc.. are good ways to exercise your Samoyed.

Make sure that you train your Samoyed properly from early on, including adequate socialization, key commands, and recognition of you as pack leader. Dogs who are not well socialized could become fearful of strangers and other dogs, leading them to lash out when scared. If you are unsure about how to train and socialize your Samoyed professional training classes are an option.

Pain aggression might occur if your dog has an injury or medical problem and lashes out at anyone who tries to get close and help them. If you observe unusual aggression in your Samoyed and  suspect this is a possibility, examine your dog carefully (if you can) and consult your vet on the best way to proceed.

Redirected aggression is possible when a Samoyed experiences a natural aggressive reaction to a perceived threat (e.g. a poisonous or otherwise dangerous animal in your yard) but is unable to express its feelings directly. This means that if you restrain your dog to prevent it from chasing the snake etc.. it might turn and bite you instead. 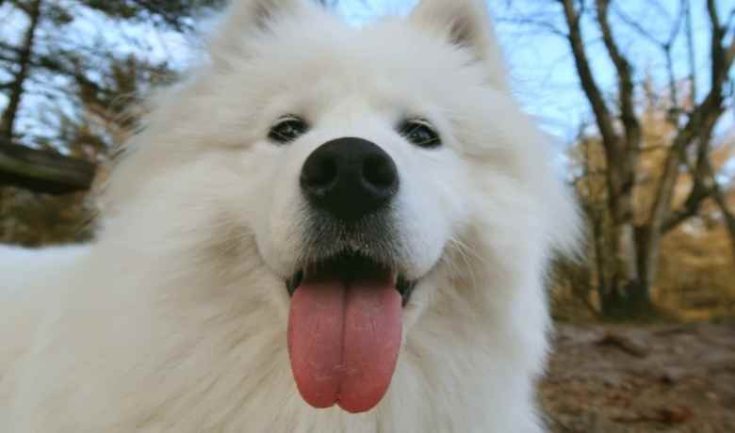 Are Samoyeds Good With Cats?

There are many things that might frighten a dog, some of the real and current, and other past associations. If you get to know your Samoyed well, you should get a feeling for when they are feeling afraid or overwhelmed. If certain people or other dogs persistently provoke an aggressive reaction in your Samoyed, you should explore why, seeking professional help if necessary to help your dog overcome its fears.

Why are Samoyeds bad guard dogs?

There are several reasons why Samoyeds are generally bad guard dogs and these make sense in the light of what we know about their lineage and the breed’s key traits.

A good guard dog will be alert, patient, and able to keep watch for long periods. They should also respond to an intruder with proportionate force to repel them if necessary. Guard dogs are often deployed alone, potentially chained or fenced-in outside a property to stop people from approaching.

Samoyeds are certainly alert dogs, but they are too intelligent, playful, and energetic to be still and watchful for long periods. As sociable animals, they are also miserable and bored when left alone without human companionship. This may prompt undesirable behaviors like excessive barking and howling, digging and chewing, etc.. if they’re chained up in a yard to guard a house.

READ ALSO:  How Much Exercising Do Samoyeds Need? 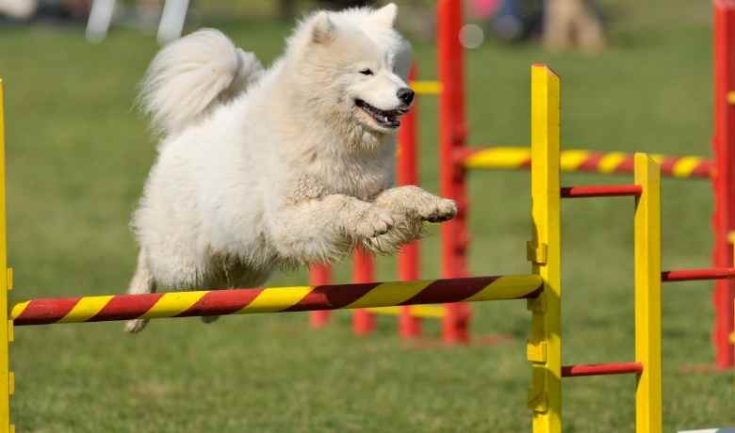 Their lack of aggression means that Samoyeds are unlikely to do more than bark at any intruder. They would probably only frighten someone who was already very scared of dogs or knew so little about them that they were intimidated by the Samoyed’s relatively large appearance. In fact, Samoyeds are so affable and friendly that they may make friends with an intruder rather than chase them off the premises.

As a general rule, Samoyeds are good watchdogs but bad guard dogs.

Will a Samoyed protect its owner?

As well as their protective trait, Samoyeds have strong social instinct and pack mentality, with their ‘pack’ normally being composed of their human household and sometimes other pets. If a member of their pack is sick or injured, they will do their best to raise the alarm and summon assistance. Training, reinforcement and reward can further strengthen these positive instincts and make Samoyeds a reassuring asset to your family.

Samoyeds will not normally attack humans or other dogs, even when they invade the Samoyed’s territory. However, every dog is capable of being provoked and it is always possible that violent or threatening behavior towards the dog or its owner could cause even a well-tempered Samoyed to bite. 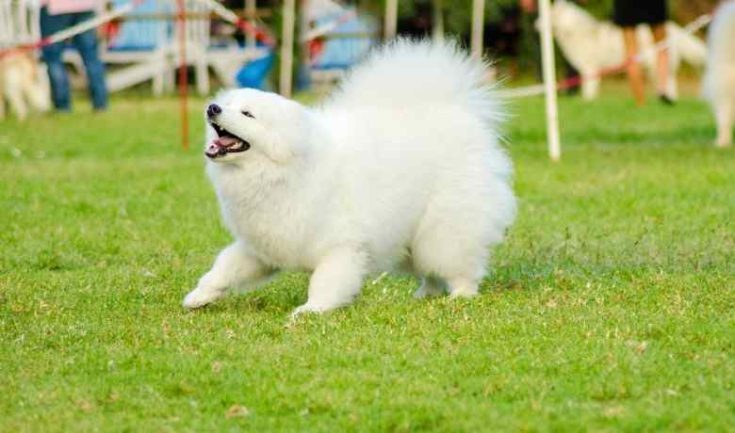 So, are Samoyeds territorial? Yes, this intelligent and beautiful dog has a strong awareness of its territory and its pack and will act to defend them. However, it is most likely to do this by barking loudly to raise the alarm and make its humans aware of an intruder or problem.

Samoyeds are amongst the less aggressive dog breeds and make excellent additions to families with small children or other more vulnerable family members. Despite strong streaks of independence and stubbornness, a well-raised and trained Samoyed will almost never exhibit aggressive behaviors, and will act to protect its human family ‘pack’ whenever it can.